White sand, bright sun, emerald sea, and lush vegetation …what is it? The Caribbean? Seychelles? The Maldives? No, this is England. Cornwall County drastically differs from the rest of the United Kingdom. Forget the rains and the gloomy weather. The Cornish Riviera offers endless possibilities for a beach holiday that are on par with the best Mediterranean resorts and some fantastic Cornwall holiday cottages to stay in. It has a great variety of beaches to satisfy every taste, from world-renowned tourist attractions to small secluded sandy coves. I’ve picked up the best beautiful under-the-radar beaches in Cornwall that are well worth going a little off the beaten track for…

Lantic Bay has nestled in a cut of a rocky cliff between Fowey and Polperro. This beach is not easy to find from land but if you are lucky enough to discover this hidden gem, you will want to come back here again and again. You can reach Lantic Bay in two ways – by walking through the field and then descending along a steep cliff or by boat. Whichever way you choose, a worthy reward awaits you – a wide strip of sand dotted with huge boulders and framed by craggy cliffs with emerald caps. Strictly speaking, Lantic Bay is two beaches that emerge at low tide. This secluded bay is an excellent place for relaxation and swimming but be careful because the current is quite strong and unpredictable.

This small half-mooned inlet can only be found at low tide, the rest of the time it shyly shelters under the turquoise water. You can uncover this secluded sandy beach about halfway between Treyarnon Bay and Porthcothan. You should be very attentive to spot Fox Cove hidden between steep cliffs. Look out for a landmark shaped like a long ridge peeking out of the sea, which cuts the bay in half. The path to the bay passes through a cliff and it is quite strenuous. But when you are down and have already caught your breath, you can boldly head for more wonderful discoveries. The remains of the shipwrecked steam tanker ‘Helmsley I’ rest at the bottom of the bay. You can snorkel to see the boiler and what is left of the bow. You may also hunt for mussels which are in a huge variety here. Fox Cove has one more surprise in store for you at the golden hour – the beach facing the Atlantic Ocean promises breathtaking sunsets.

This is another picturesque beach that has found refuge among inaccessible rocks. Indeed, if you look down from the top of a cliff, it will seem that there is no path to go down. However, the path steeply runs along the towering rocks and you will have to half-walk half-climb to conquer it. At the bottom of a cliff, you will find the velvety sand and gentle leisurely waves. If you are not a fan of extreme hiking, you can reach Pedn Vounder from the nearby Porthcurno beach but the path along the shore is only accessible in spring during low tides. Despite the challenging approach, Pedn Vounder attracts more and more tourists. It became known after featuring in one of the episodes of Poldark. Another thing you should know about Pedn Vounder is that it’s a popular place for nudists. If sunbathing in the birth suit is not exactly to your liking, you can go in search of the Logan Rock, famous 70-ton rocking stone.

This neighbour of Pedn Vounder is more suitable for a family beach holiday. It is located in the lowland between two verdant hills rising to the sky at 60-70 meters. The hills are carved with walking paths so that you won’t have much difficulty getting to the beach. The vicinity of Porthcurno coastline is recognized as one of the Areas of Outstanding Natural Beauty, which makes it a must-see place in Cornwell. Families with children will be delighted with this beach. Little ones will enjoy the stream on one side of the bay where they can paddle. Adults may dare to conquer the mighty waves on a surfboard or just admire the endless blue sky and azure waters when the sea is calm. The highlight of this place is the open-air Minack Theatre, carved into rock and opened in 1920. Along with Pedn Vounder, Porthcurno beach also has become a set for Poldark’s episodes.

Located on the western side of the Lizard peninsula, Kynance Cove is considered to be one of the most photogenic and romantic places in Cornwall. The contrast of golden sand pointed rocks crowned with green caps, and crystal clear turquoise water attracts artists and photographers from all over the world. The bay became popular in the Victorian era when creative people from the entire country started visiting this place looking for inspiration and a dose of fresh sea air. Prince Albert, the husband of Queen Victoria, has often come round to admire the fascinating view. Kynance Cove is also known for its unique serpentinite rocks, which are a popular material for crafts.

The name of this scenic cove has nothing to do with the prominent German state. It was named after John Carter, one of the most dangerous pirates of the Cornish coast. He received the nickname “The King of Prussia” for courage and charisma. He captured the local bay Port Legh (the former name of this place) to smuggle goods from France. Pirates used it to store an arsenal of weapons, as well as stocks of rum, brandy, and gin. The granite bed of the bay still keeps the crushed tracks from the carts carrying smuggling from the ship to the stash. Prussia Cove is connected with two other bays by natural underground passages which can be explored by snorkelling enthusiasts. The top of the cliff houses a number of cottages which accommodated soldiers of the royal guard in the 19th century who protected the bay from pirates.

Bosahan Cove is strikingly different from other beaches on our list. Instead of majestic rocks, this lovely beach is surrounded by dense woodland. Although you can get to Bosahan Cove in three different ways, it remains a secluded place, and you can often enjoy its magnificence on your own. You can sail here by boat, take a one-mile walk along the coast or go through the Bosanan Estate. We strongly recommend the latter option because it includes a stroll across the sub-tropical gardens of Bosanan, known as ‘the most Cornish of all Gardens’. Bosahan Cove is settled at the mouth of the Helford river so you will not find surfing opportunities here. Instead, this peaceful place is ideal for relaxing and observing white yachts gliding along tranquil waves.

This small secluded stretch of coast, also known as West Coombe Beach, is located on the outskirts of the Lansalllos village. It will take you 20 minutes to reach the beach from the village but this walk through a shady valley along a stream promises to be filled with incredible views. After passing through a quirky cut in the rock, you’ll wind up on a cosy beach in the shape of a crescent. The cove is smothered with white sand mixed with quartz shingles which give way to a rocky sea bed coming into view at low tide. Lansallos Cove is fenced off by cliffs with fancy folded rocks. The highlight of this place is a small waterfall called Reed Water that once has fed a small water mill. 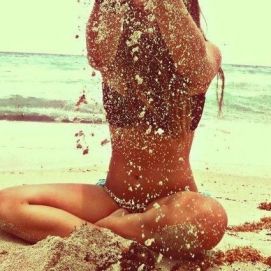