© Alessandra
The Art of Traveling

One of the brightest moments of my childhood is the journey to Spain. Okay, to be honest, mostly I was amazed not by the greatness or uniqueness of the country (cause I was too little for that) but by the amusement park we went to for three days - PortAventura.

Port Aventura Park is a theme park 85 km southwest of Barcelona, Catalonia, Spain. It’s has opened in 1995 and has an area in 52 ha. Exept for the park, there also are  Ferrari Park, a convention centre, a RV park and 5 hotels. This points are all included in the PortAventura World.

In one of the hotels we had stopped. I remember the first thing I saw was a big statue of a red and blue duckbeak bird by the entrance, which turned out to be a symbol of the park - Woody Woodpecker. Later I noticed him everywhere - on the T-shirts, cups, hats, near every attraction was his image, there even were people dressed up in costumes of him. As I was a child, I was very exited!

The fact that we lived in a hotel gave us an exemption of a special card, which meant that we could visit 10 attractions out of turn. And it was very convenient, cause the queues were really long. When we arrived to the hotel, we were very tired so we decided to delay visiting the park and stay at the hotel that day. In addition, it was very cool - spacious, modern and  thematic. Although we didn’t visit the park that day, we had a lot to do - swim and sunbathing, visiting some restaurants, Game Centers and shops, so we didn’t bore.

When I woke up next morning, I could hardly sit relaxed, cause feelings were filling me up! I couldn’t wait to go to the park, so as soon as we had had breakfast (very fast!), we set off to the Port Aventura.

The coolest thing of the Port Aventura World is that it’s all is incorporated by one theme. The colors, characters (Woody, SesamoAventura’s and others), matters are all the same. When you get there, you feel like you are in a cartoon!

On the way to the attractions we passed a lot of shops, cafes, museums and other stuff. And there were a lot of people - mostly tourists. The first attraction you see is right on the lake - FURIUS BACO, which is the fastest in Europe! It’s hard to describe how exited I was after riding it - we went upside down, forward and back, we were shaken and rotated. So cool!

All the attractions are devised into sections, and the Furius Baco is one of the “MEDITERRÀNIA”. The other sections are POLYNESIA, CHINA, MEXICO, FAR WEST and SÉSAMOAVENTURA. I can’t highlight only one of them as my favorite, cause each one has its own features. But the most popular attractions are Tutuki Splash and Kontiki from POLYNESIA, Shambhala and Dragon Khan from CHINA, Hurakan Condor and El Secreto de los Mayas from MEXICO, Stampida and Silver River Flume in FAR WEST, El Huerto Encantado and El Árbol Mágico from SESAMOAVENTURA.

Port Aventura is recordsman by many things. For example, Stampida is the only train and wooden rail attraction in the world. The Hurakan Condor is one of the hugest free fall tower (100m), and the Shambala is the highest rollar coaster in Europe. Moreover, Dragon Khan is the most winding attraction ever!

I remember very well how we went to the Kon-Tiki - the classic wooden ship looking like the legendary vessel of expedition Kon-Tiki. My mum doesn’t like extreme attractions, so I persuaded her to go with me on that “sweet ship”. Somehow we hadn’t knew what did it constitute so we sat in the back of the ship ready to have a little soft ride. And it began like that - the ship started to swing from side to side. But then, though, the speed began to grow and several seconds later we felt like we were flying. My mum was terrified and shocked, but I was very exited and fun!

I was very brave girl so I wasn’t afraid to ride extreme roller coasters like Shambala or Dragon Khan, but my father went with me and my mum stayed in the hotel :D

Also I remember the gorgeous fire show on the lake. In the evening lot of people came together to watch the magical performance when the night sky was lighten by the thousands of twilights. There also were music, balloons, food and water dances. Really cool!

To be honest, I dream to go there one more time, cause I was little and now I don’t remember much. But the main thing I’m sure in is that PortAventura is really worth visiting, especially by kids. It’s the special world when everyone can feel happiness just because it seems that you had returned in childhood one more time. 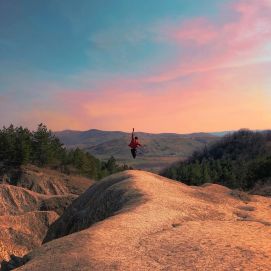